Wetlands have been compared to rainforests and coral reefs because of the large amount of plants and animals they support. While wetlands only exist on five percent of the land in the Chesapeake Bay watershed, one in ten of the region’s endangered species need wetlands to survive.

Shallow wetland waters provide ideal habitat to plants, fish, frogs, birds and mammals. About 75 percent of all commercial fish species in the United States spend at least some part of their lives within a wetland, and about half of all North American bird species live or feed within wetlands. In the Chesapeake Bay watershed, 87 species of water birds make wetlands their winter home.

Below are some of the animals and plants that are commonly found in wetlands. Learn more about these and other wetland species—including photos and animal calls—in the Chesapeake Bay Program's field guide. 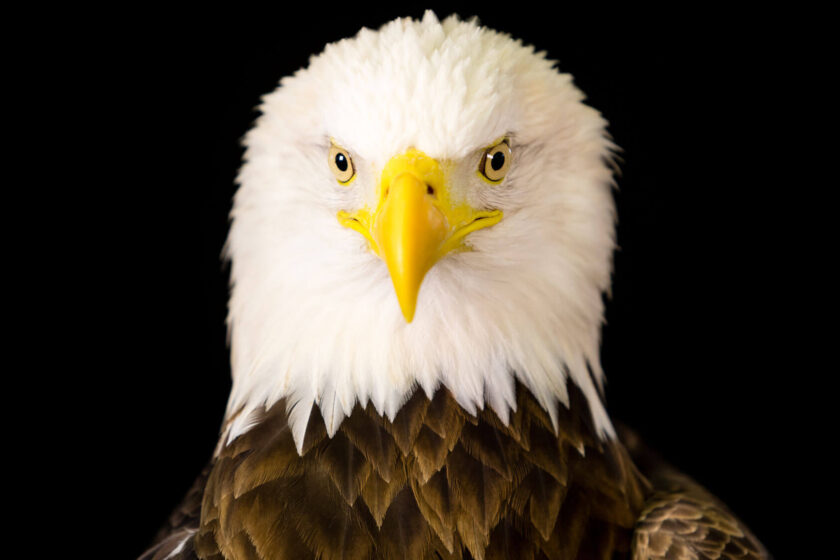 This large raptor has a yellow, hook-shaped bill and a white head and tail. It primarily eats fish, but will also hunt small mammals and waterfowl. Bald eagle nests are some of the largest in the world and are located in mature trees near the water. (Photo by Will Parson/Chesapeake Bay Program) 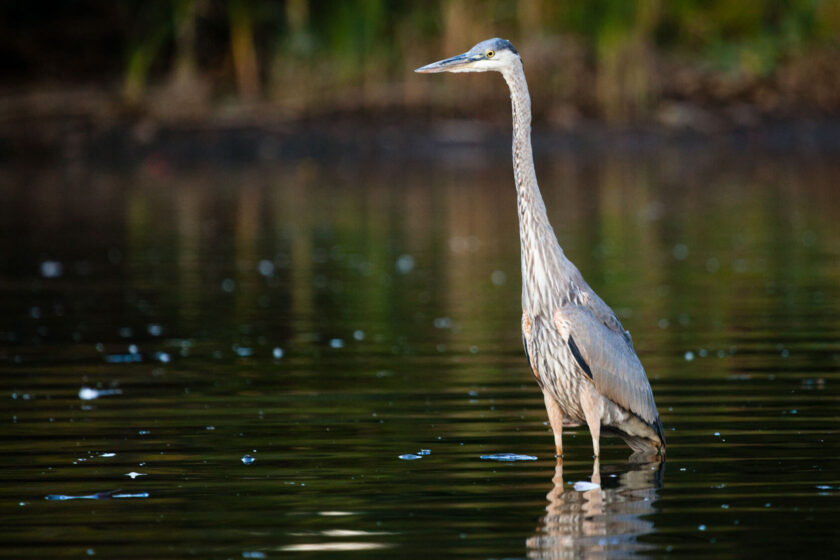 This tall, blue-gray wading bird has a long, pointed bill and an S-shaped neck. It is the largest heron in North America and eats fish, insects, amphibians, crustaceans and other small animals. (Photo by Will Parson/Chesapeake Bay Program) 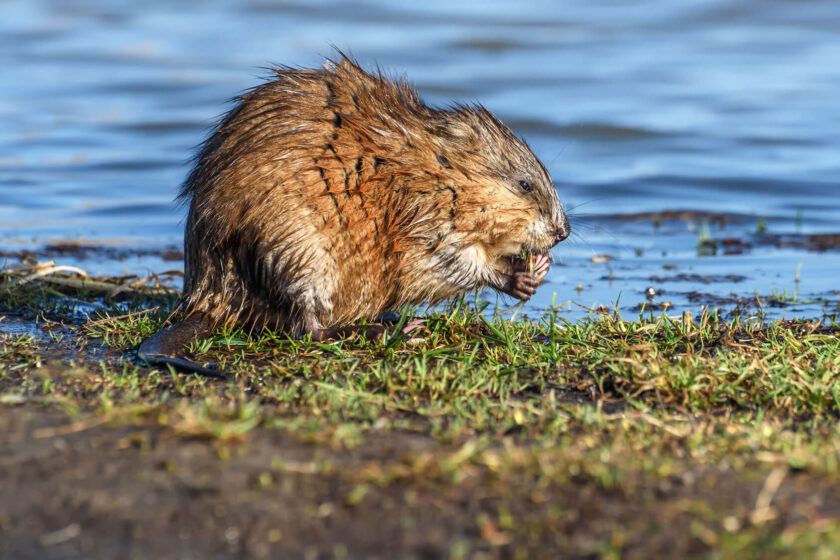 This medium-sized, semi-aquatic rodent has glossy brown fur and a long, scaled tail. It eats the roots and rhizomes of marsh plants, as well as fish, frogs, insects and shellfish. (Photo by Iri_sha/Shutterstock) 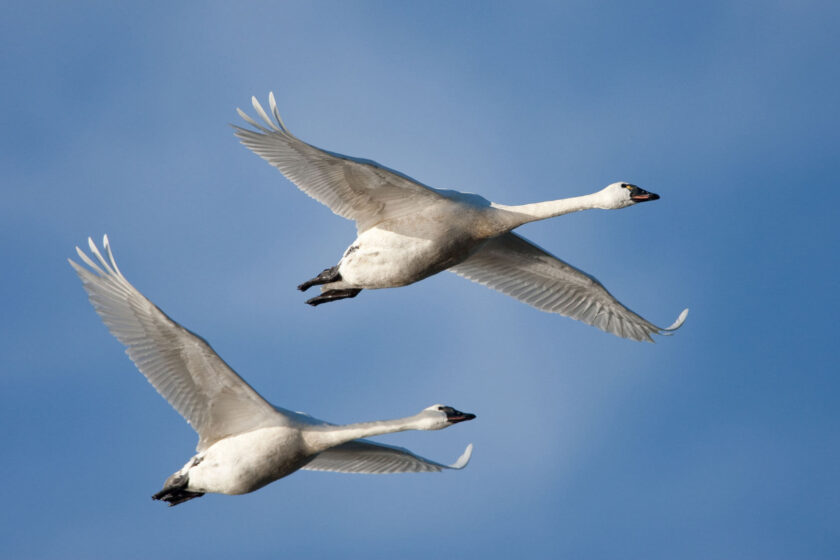 This large, white bird has a black bill and a straight neck. It prefers shallow waters and often overwinters on farms. It eats seeds and aquatic vegetation and can be seen foraging with its head and neck underwater. (Photo by MCarter/Shutterstock) 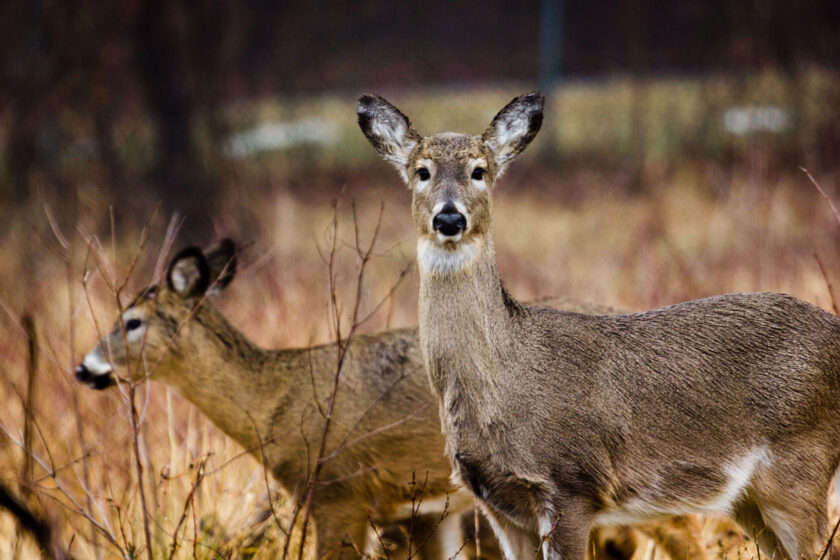 You may see this brownish deer eating leaves, fruits, nuts, twigs and other vegetation at dusk and dawn. It often travels in groups and raises its tail like a flag when alarmed. (Photo by Steve Droter/Chesapeake Bay Program) 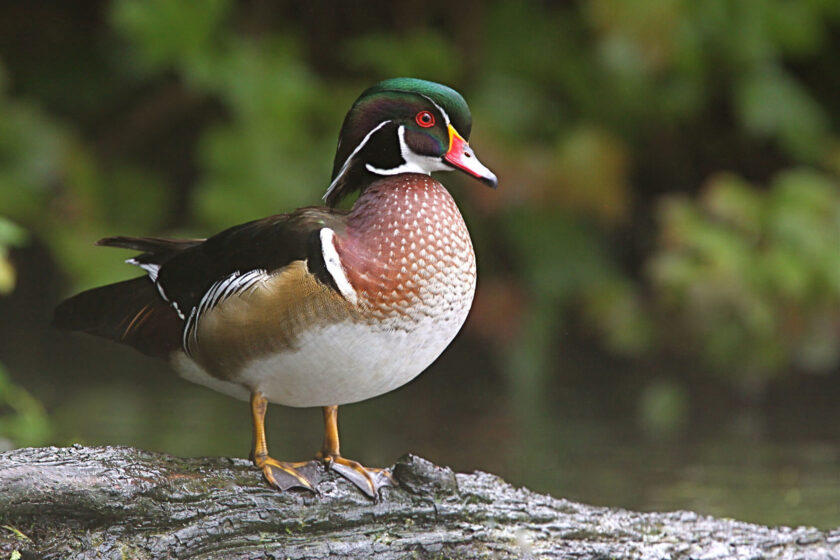 This dabbling duck lives in marshy wetlands and wooded swamps. Unlike other waterfowl, wood ducks nest in tree cavities. Males have an iridescent green head, a chestnut breast, red eyes and white stripes on their heads and bodies. (Photo by Tom Reichner/Shutterstock) 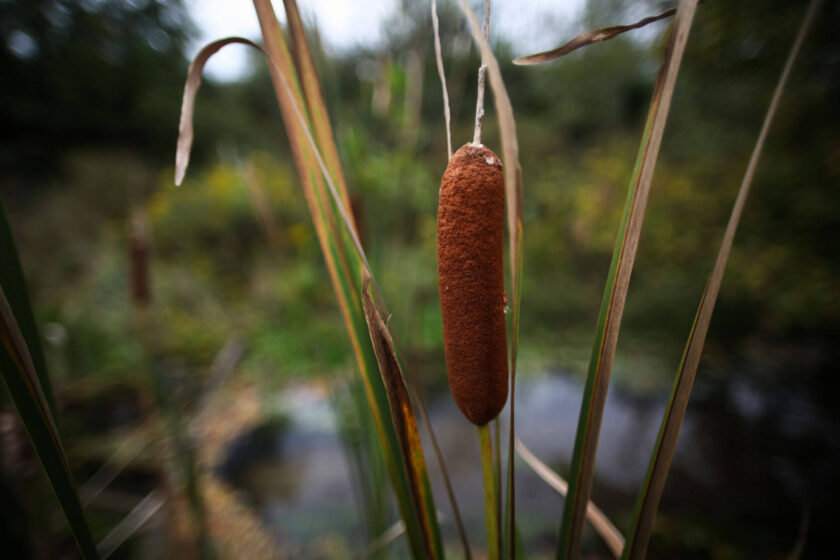 Cattails grow in fresh and brackish wetlands and can reach six feet tall. The brown, sausage-shaped “tail” of this plant is a female flower spike full of tightly packed seeds. (Photo by Steve Droter/Chesapeake Bay Program) 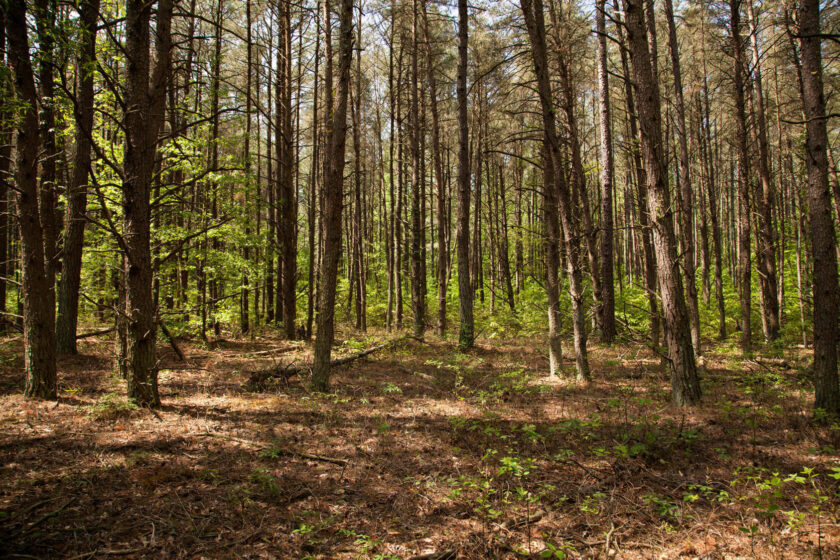 This tall evergreen has long, thin needles and scaly bark. It provides habitat to nesting bald eagles and is used for pulp, mulch and timber in the southern United States. (Photo by Chesapeake Bay Program) 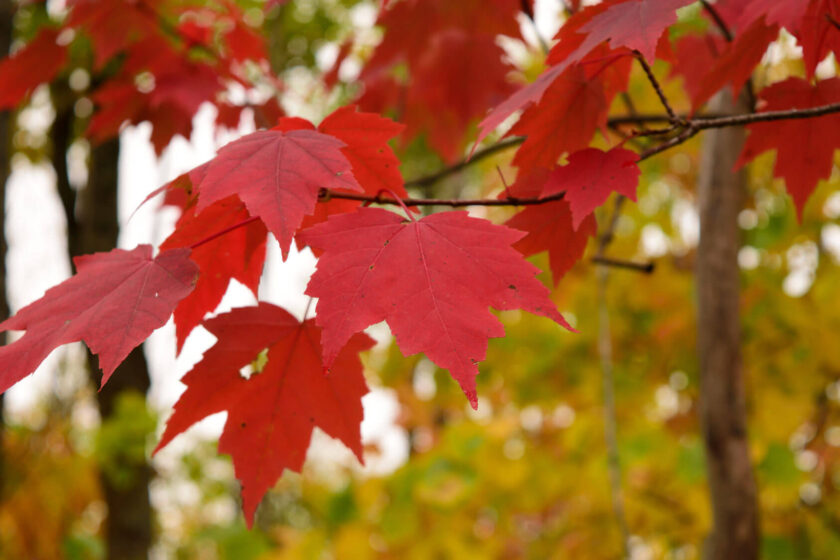 This deciduous tree produces red flowers in spring and displays red leaves in fall. It has gray bark and winged seeds and provides food, shade and nesting habitat to wildlife. (Photo by ClubhouseArts/Shutterstock) 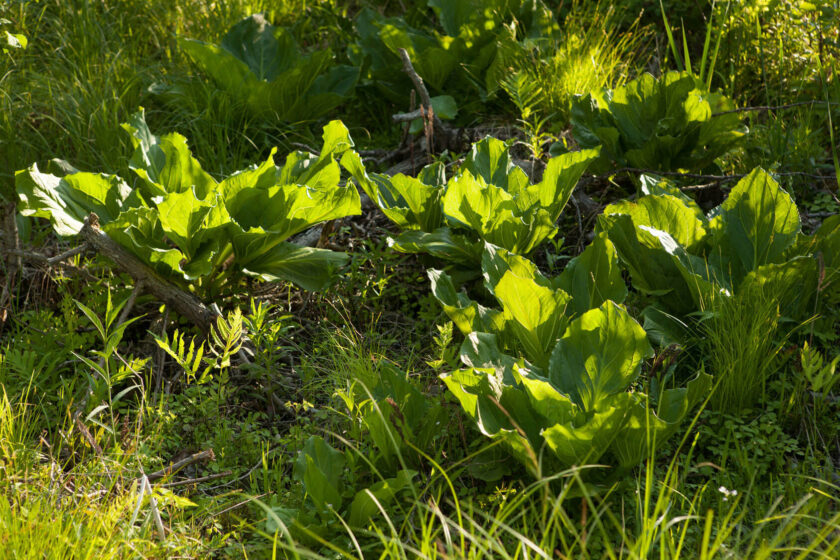 This low-growing plant emerges in spring. It produces a cluster of flowers that is shielded by a wine-red “hood.” Its yellow-green leaves exude a skunky odor when crushed. (Photo by Will Parson/Chesapeake Bay Program) 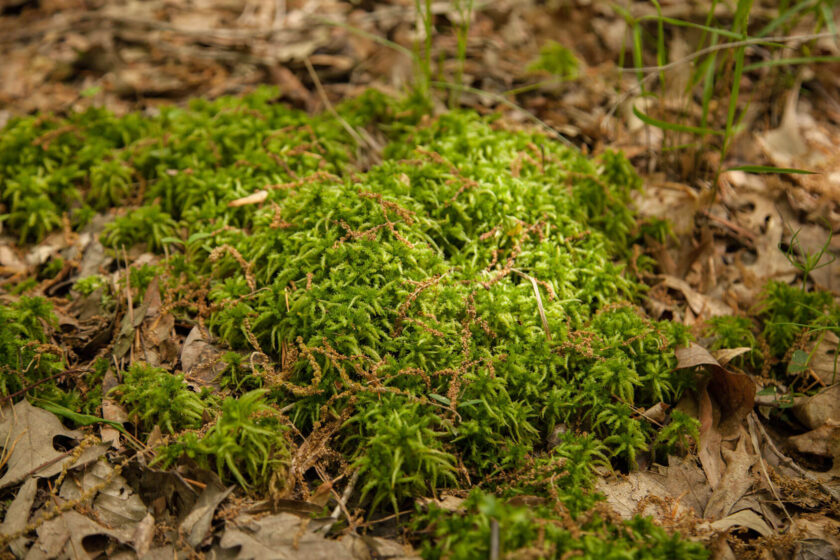 Sphagnum moss comes in a range of colors, including green, reddish orange and golden yellow. It can hold up to 26 times its weight in water, which helps it spread into drier areas as it grows. (Photo by Chesapeake Bay Program) 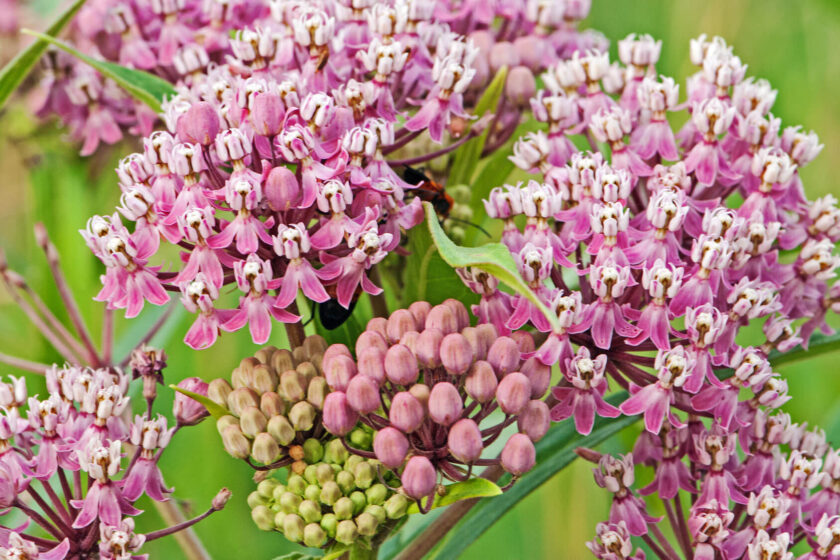 This native perennial is an important source of food for monarch caterpillars. Its large pink or purple flowers attract butterflies and hummingbirds. In fall, these blooms become tear-shaped seed pods. (Photo by Gary Witte/Flickr)